Moving on with our exploration of Stage Three: Accepted Discipleship from the Ageless Wisdom teachings, this post examines how we are told to blend the mystic with the occultist (heart and head), and explores how this might relate to certain things taught in the Integral approach by Ken Wilber.

The phrases mystic and occultist are not found in our modern day popular vocabulary much. If they are mentioned, they are often relegated to some sort of weird or distorted way of being, and in the case of the word occultist, this word may even be associated with something demonic. These constitute major distortions in understanding. Before we can begin any kind of comparison, and how we are supposed to blend the two, we need to better comprehend what we mean by these terms.

Quoting from Alice Bailey’s Letters on Occult Meditation here is what she has to say.

The mystic mounts by aspiration and intensest devotion to the God within or to the Master Whom he recognises; the occultist attains by the recognition of the law in operation and by the wielding of the law which binds matter and conforms it to the needs of the indwelling life. In this manner the occultist arrives at those Intelligences Who work with the law, till he attains the fundamental Intelligence Himself.”  pp. 147 – 148

To elaborate in my own words on the above, the mystic tends to neglect the outer form.  In the words of Integral he or she is more involved with discovering the unmanifest realms moving into the non-dual (often through using an Ishta-deva, or representation of God/Goddess, known also as Ishvara in the Yoga Sutras of Pantanjali).

As for the occultist, in many ways we could equate this term in modern day language with scientist!  Occultists are trying to understand the “occluded” or “hidden” realms by discovering how nature works. They start with the manifest world that we can observe through our five senses and move inward to the unmanifest worlds (atoms, quarks, etc) in an attempt to control and manipulate these forces for better or ill.  By being able to reliably and accurately predict how things work, occultists gain power over the forces of the natural world.

The mystic tends to be more emotional, devotional, and unquestioning of what is being experienced.  Through devotion that starts out intense and then moves into an eventual quieting, the mystic reaches higher levels of understanding and awareness. The major difficulty for the mystic is learning how understand if what he/she is intuiting is really accurate, or is it really a glamour or distortion. That is where mental inquiry comes in. What is really being experienced here?  The lower form of mystic never even bothers to question it.

On the other hand the occultist tends to be more mental. Ken Wilber could be seen as more of an occultist.  He is very interested in understanding how things actually go together and work.  He is also interested in research. What does the data actually say about these things?  And, yes, you can get data that goes beyond only subjective experiences.  Getting that data is a lot of what Integral (or being an occultist) is all about. 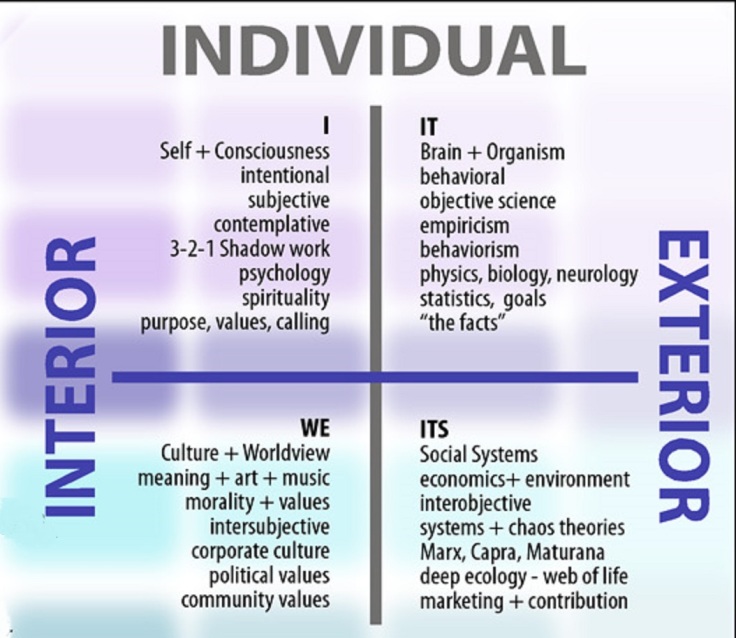 The mystic and the occultist could also be related to the notion of types. In the Integral model these two approaches (mystic and occultist) could be connected somewhat with the types of female and male, with women being more inclined to be the mystic and males to being the occultist. In many ways this is an over-simplification as many men can be more mystically inclined, and women can become occultists.

What Bailey goes on to say is that by the time we reach the stage of Accepted Discipleship we need to become BOTH the mystic and the occultist. Ken Wilber would say we need to learn to access all quadrants to be “integral.”  In Integral, this starts to happen around their Turquoise level. 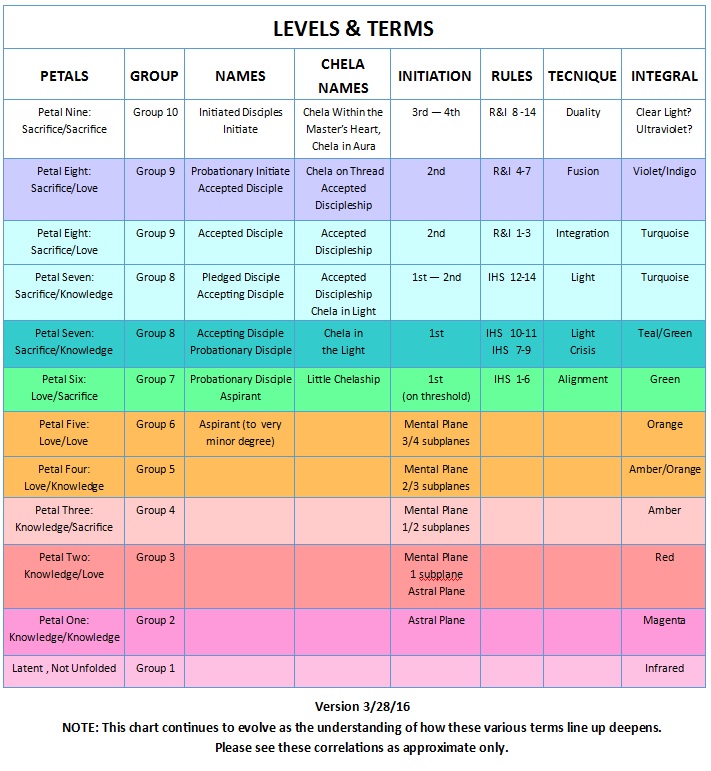 Going back to quotes from Bailey about how we need to become both she says, “To make it more simple for general comprehension: after initiation the mystic is merged in the occultist for he has become a student of occult law; he has to work with matter, with its manipulation and uses, and he has to master and control all lower forms of manifestation, and learn the rules whereby the building devas work. Before initiation the mystic path might be expressed by the term, Probationary Path. Before the occultist can manipulate wisely the matter of the solar system he must have mastered the laws that govern the microcosm, and even though he is naturally on the occult path yet he will still have to find the God within his own being before he can safely venture on the path of occult law.

One works along the line of love; the other along the line of will. The mystic fails in the purpose of his being – that of love demonstrated in activity – unless he co-ordinates the whole through the use of intelligent will. Therefore he has to become the occultist.

The occultist similarly fails and becomes only a selfish exponent of power working through intelligence, unless he finds a purpose for that will and knowledge by an animating love which will give to him sufficient motive for all that he attempts.” p. 149

Again, helping us to further understand the above, the mystic as we see is on the Probationary Path.  He or she is not yet an Accepted Disciple.  And, he or she will suffer from many of the problems of Little Chelaship and Chela in the Light, because even though there is a lot of emotional striving (which in Integral terms tends them to want to drift off into states) there is not enough of a discerning mind. The mystic is then notorious for being pretty ineffectual in the world.  “Love is not demonstrated in activity,” Alice Bailey tells us. We see this in spiritual people who are not able to make a living, have successful relationships, or deal with life in a practical way.  By the time we get to the stage of Accepted Discipleship this has to end.  Accepted Disciples have to prove that they can handle being in the world as well as being set apart from it.  It is not enough to have all kinds of glorious experiences in tranced out states.  One, needs to prove that these realizations have worth through effective service in the world.

At the same time the occultist, with the emphasis on intelligence, we are told has to develop more “animating love.” The occultist will not move through the Little Chelaship or Chela in the Light stages in the same tranced out ways.  Instead, he or she may be inclined to seek power.  That power may come in being masterful business men (or women), scientists, or even intellectuals (who can spout all kinds of esoteric and “integral” theories and facts).  However, the heart is missing, and though he/she may not be as inclined to trance out, glamours and distortions may still exist that are even harder to recognize because one is so entrenched in being smart or right.

Again, at the stage of Accepted Discipleship BOTH approaches need to be experienced and mastered, with their pitfalls (or glamours) overcome. That is the important point.  In a sense Bailey is saying what Wilber is saying, we have to become Integral. Only by being the  occultist and the mystic (blending head/heart and male/female approaches), can we move successfully forward.