This post gives a quick summary of Group 7. Few people on the planet are within this group, however it represents those that are on the spiritual path in a more serious way finally emerging.

Note: These colors follow the traditional spectrum of color as science, artists, and most systems that study the chakras know it. It does not always reflect the colors mentioned in the Bailey books and I am personally not too thrilled with some of the titles of these colors (corn? pumpkin?). Have a better idea? Let me know. Also, The below also includes triangles and a circle I have put in. Becoming Human focuses on the Personality triangle. The majority of humanity is not yet what Bailey calls an “Integrated Personality.” Becoming Soul (which is the book I am putting up as I finish each chapter now), covers some of the levels of the Personality triangle as it becomes “soul infused,” as well as the circle below known as the “Egoic Lotus” (which is the “Soul” in this system). When the personality becomes completely “soul-infused” we then shift increasingly to the Spiritual Triad to become “Spirit.” Please see these as stages of unfoldment. As long as we are in a physical body we all have personalities, souls, and are Spirit, we just have not unfolded the various levels yet. 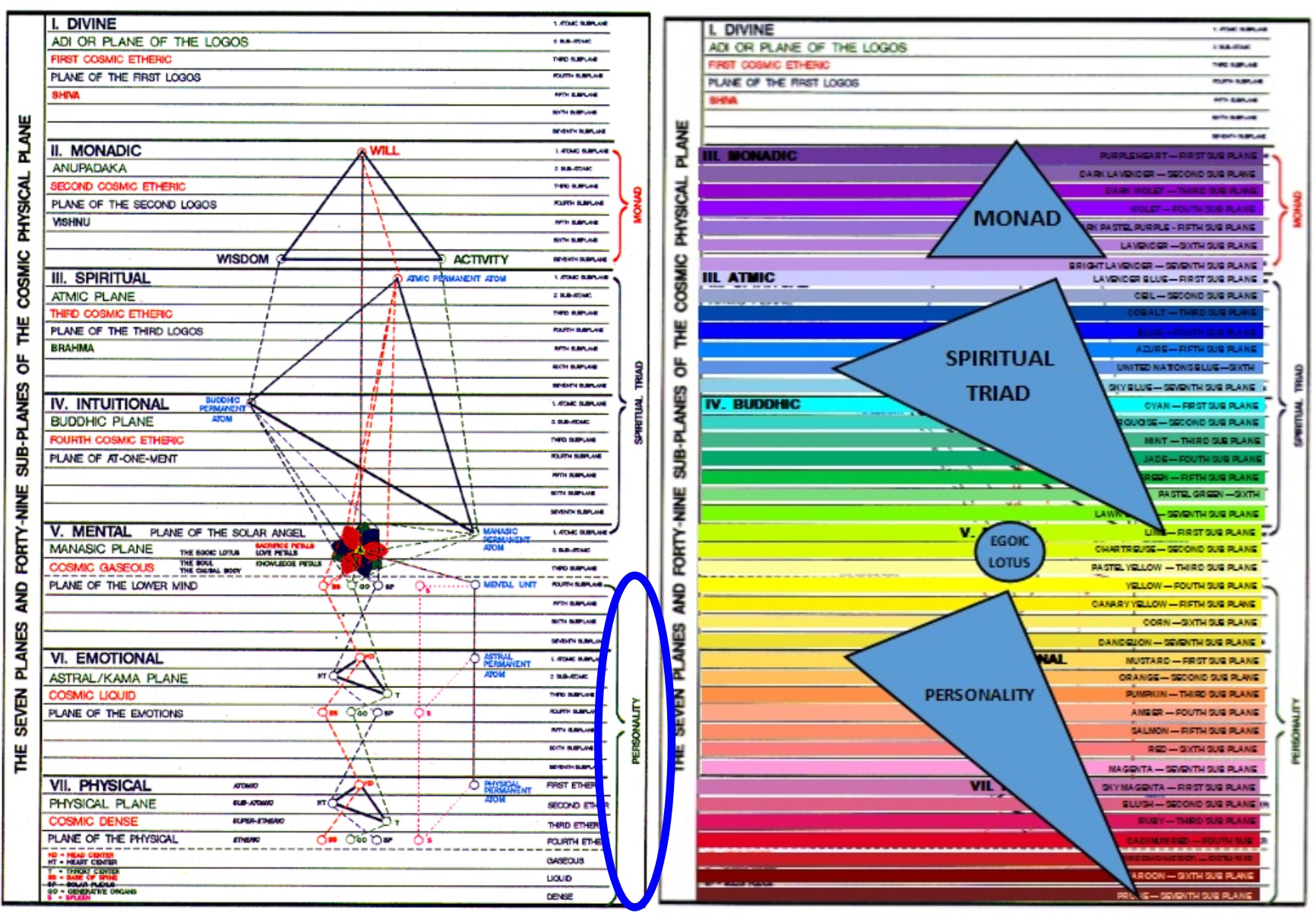 Note: No where does Alice Bailey correlate her 10 Groups of Human and Soul Evolution with various sub-planes. The correlations are all my ideas based upon my current understanding of her work. After many years of working on this I feel these are adequate correlations, but as my understanding deepens adjustments may be made.

Those on the spiritual path who would be considered “probationary disciples” in the Bailey model and Green, Teal, and a little bit of Turquoise in the Integral model are found within this group. Most of Bailey’s books were written for those in Group Seven and to a lesser degree for those in Group Eight. Because there is so much to say about those in Group Seven I have been writing a number of chapters covering this stage. Group Seven I believe also takes us onto the Mental Plane something many will consider controversial, so I am putting a summary of the chapters I wrote about this as well below.

Shift Onto the Mental Plane

In Chapter Eight: The Emotional Plane, I began to state my case that unlike what many people may commonly believe, most of humanity is not on the Mental Plane. They are on the Emotional Plane where they are “kama-manasic,” meaning their minds are dominated by desire, immersed in the realm of the five senses, and prone to being emotionally reactive. In that chapter I revealed how just because people can think concretely and to some degree even abstractly, this is not at all what the Bailey model means by residing on the Mental Plane. Within the book Becoming Soul in Chapter Six: The Mental Plane – An Overview, and Chapter Seven: The Mental Plane – Specifics, I showed what Bailey does mean by residing on the Mental Plane. In essence it means we need to shift out of our classic understanding of what “concrete and abstract mind” according to psychologists like Piaget. Instead, we need to see that the Mental Plane involves the increased capacity to go beyond the realm of what the five senses reveals, use the mind to steady and calm the emotions, and to decrease the overwhelming desire nature of the Emotional Plane. I also showed how Bailey’s thoughts about the Mental Plane close line up with those of Integral and even expand beyond their ideas. Please review these chapters if you want to be more clear about my ideas here.

Summary of Chapter: As this chapter shows the shift onto the Mental Plane and into the Probationary Path in the Bailey model is quite involved. In fact, it is so involved we will be looking at what takes place in a number of chapters. The main take aways in this chapter are seeing how at the Probationary Discipleship stage, the Probationer is shifting from the Emotional Plane onto the Mental Plane. Now the pull of “kama-manas” that traps the mind into desiring only what is revealed to it by the five senses is starting to wane. The desire to obtain money, pleasure, and power for one’s self (as a separated and selfish Integrated Personality) is being more actively challenged. The Probationary Disciple is  genuinely beginning to see the value in realms beyond what the five senses reveal. For this reason a more sincere attempt is being made to practice spiritual disciplines. The first steps on this “Path of Purification” involve character building and also a focus on physical purification involving things like diet, exercise, pranayama, fitness, and hatha yoga exercises.

The Probationer, however, is just that — on probation — precisely because the Probationer can still easily “break probation” and fall off the spiritual path. The reason the Probationer can slip is because he or she is still too close to the Aspirant and Integrated Personality levels of consciousness, where the drive to gain money, pleasure, and power for oneself is still strong. For this reason many Probationary Disciples are torn between the material and spiritual worlds making them unsure of how to put both together in a way that really serves the higher good. As members now of Group Seven, Probationers feel pride in their spiritual advancement, often failing to recognize that they are still beginners on the spiritual path. This can lead them to overly inflate their true spiritual status.

Also, even if outwardly Probationers believe they have gone beyond the selfish motivations of Group Six (for money, pleasure/sex, and power), too often they are still indulging in Group Six behaviors. To rationalize their need to indulge in money, pleasure/sex, and power in a selfish way they tend to dress it up in “spiritual garb” labeling these urges as practicing some sort of “crazy wisdom,” “New Age Aquarius modes of thinking,” “engaging in a Tantric approach to spirituality,” or (to use a Bailey term) “undergoing a more seventh ray approach to spirituality to counteract the old sixth ray puritanical way of thinking” and so forth. But, as revered yogi Paramahamsa Yogananda revealed, more often than not, these kinds of statements are merely an excuse. Seeing through this kind of deceptive shadow is something the Probationer finds it difficult to do. Still, steps forward onto the Mental Plane and spiritual path are being made. And, even though Probationers make mistakes, they become valuable lessons, that will serve the individual either in this lifetime, or the next.

Within the Alice Bailey model once one reaches the stage of Probationary Disciple a number of “rules” for spiritual development are given. I have started to cover these rules in the following link. These rules act as guidelines to be mastered before one takes what Bailey calls the “First Initiation.” A chapter outlining that initiation is to come, but an outline of what initiation is can be found here.

Heading Keywords from Chapter Nine: The Probationary Disciple, Part One

Summary of Chapter: The summary of this chapter has not yet been completed. Essentially we see how a more sincere shift away from the realm of the five senses, into realms that are beyond the five senses, leads the Probationary Disciple to want to explore the subtler realms. The positive effect of all this is that the subtler realms are beginning to be recognized and understood. The negative effect is that the subtler realms are not yet understood very well. Because a reaction against the logical aspects of the mind found in Group Six (that tends to reject anything not of the realm of the five senses) also kicks in, there is not enough discernment regarding what is really going on in these inner worlds. For this reason the Probationer is prone to being gullible as their spiritual devotion and inclinations are preyed on by others who are misled as to what the spiritual path is really all about.

Heading Keywords from Chapter Eleven: The Chela in the Light, Part One

Summary of Chapter: This chapter is presently being edited and I have just started posting it on this site as of 12/2019. I have decided to put the headers from the chapter I am editing up on this site to give you a sense of what is to come. Essentially, the Probationary Disciple is now the “Accepting Disciple,” willingly accepting spiritual disciplines as a part of one’s every day life. The individual is also spending a great deal of time as a “Chela in the Light,” which essentially means one is more capable of holding one’s mind steady in the light both in and out of meditation practices. Because of this the Chela in the Light is seeing the difference between the “astral light” (which exists on the Emotional Plane), and the “light of the soul” that exists on the Mental Plane. The pull of the five senses and their emphasis on accepting as real only that which the five senses reveals is breaking apart. The hold of the material world is losing its appeal as the Chela in the Light sees more clearly that money, pleasure/sex, and power are not the main keys to happiness. Rather, soul values are (wisdom, love, compassion, inclusiveness, understanding, and more). Finally, the soul is revealed as a fact, meaning the individual knows beyond a doubt the existence of the REAL, and begins to use the mind as a search light into the subtle realms to more clearly navigate how these realms scientifically and factually work.

Copyright © 2019 by Lisa Love. All rights reserved. No part of this blog may be reproduced or transmitted in any form, or by any means, electronic or mechanical, including photocopy, recording, computer, or any information storage and retrieval system, without permission in writing from the author.